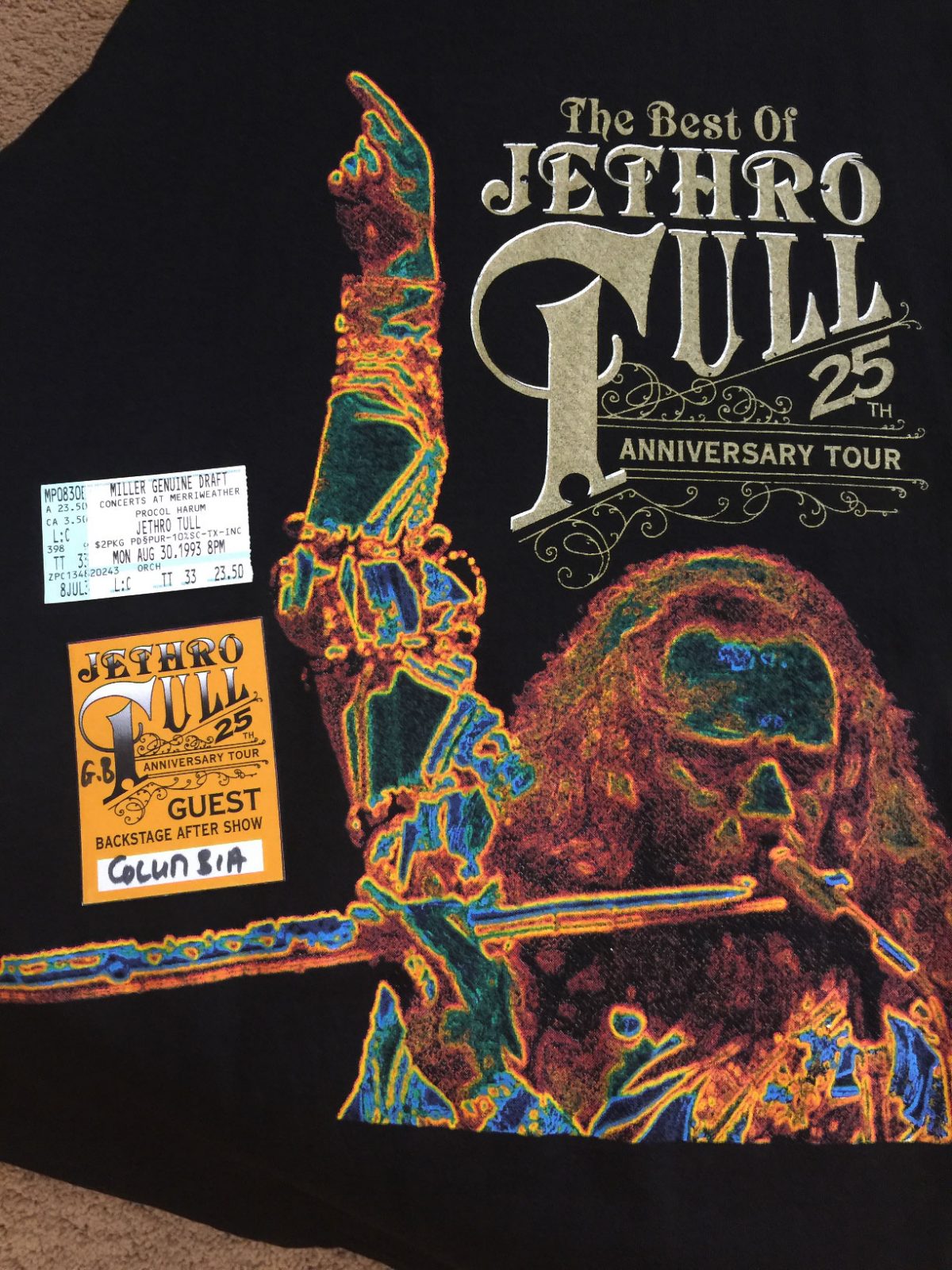 It’s Friday morning, October 26, 2018 and Ian Anderson is in Israel for a series of shows as part of the Jethro Tull 50th Anniversary Tour which he is headlining with his current band. Nissim is there at the same time on business and as the elevator at the Sheraton Tel Aviv stops on the seventh floor, in walks Ian – who greets everyone with a jovial “Hello!” This leads to an interesting meeting and discussion on Hayarkon Street as Ian strides rapidly out of the Sheraton Lobby for a brisk jog in preparation for the band’s show that evening at the Habima Theater. 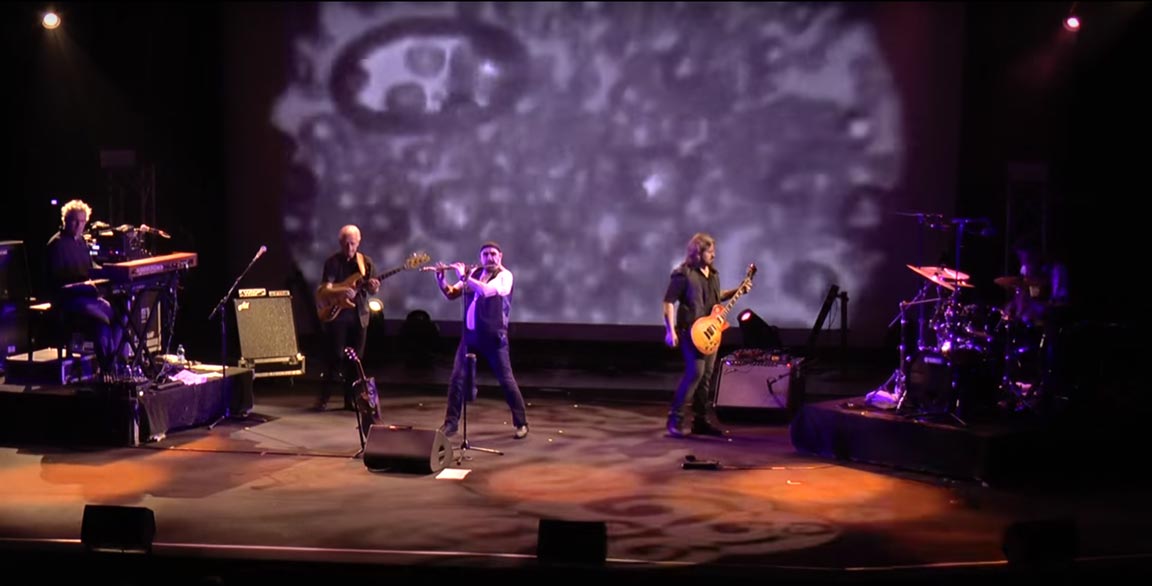 But this pleasant but accidental exchange has an almost five decades-long history! During the conversation just outside the Sheraton, Nissim is able to remind Ian of a previous exchange – backstage at the Merriweather Post Pavilion in Columbia, MD (outside Washington D.C.), on August 30, 1993. Jethro Tull is performing there that night (with Procol Harum as the opening act) as part of their 25th Anniversary Tour. In the intermission between the two acts, Nissim and friends and family are approached in the stands by Jethro Tull’s manager, who offers them an opportunity to meet the band backstage after the concert – and for a maximum of three members of the group to sit on stage as props at the end of the concert as Tull performed Aqualung!

During that back-stage meeting, Ian is curious to hear about The Combustibles and that during their on-stage performances in Bombay, two Jethro Tull songs featured prominently in the band’s set-list, i.e. Teacher (from 1970) and Locomotive Breath (from 1971). Amazingly, Jethro Tull had just confirmed that their 25th Anniversary Tour would be taking them to India for the first time (in February 1994), with stops in Delhi, Bombay, Bangalore and Madras (Chennai). Ian happens to have a fax of the itinerary with him backstage – and proceeds to autograph it before handing it over! 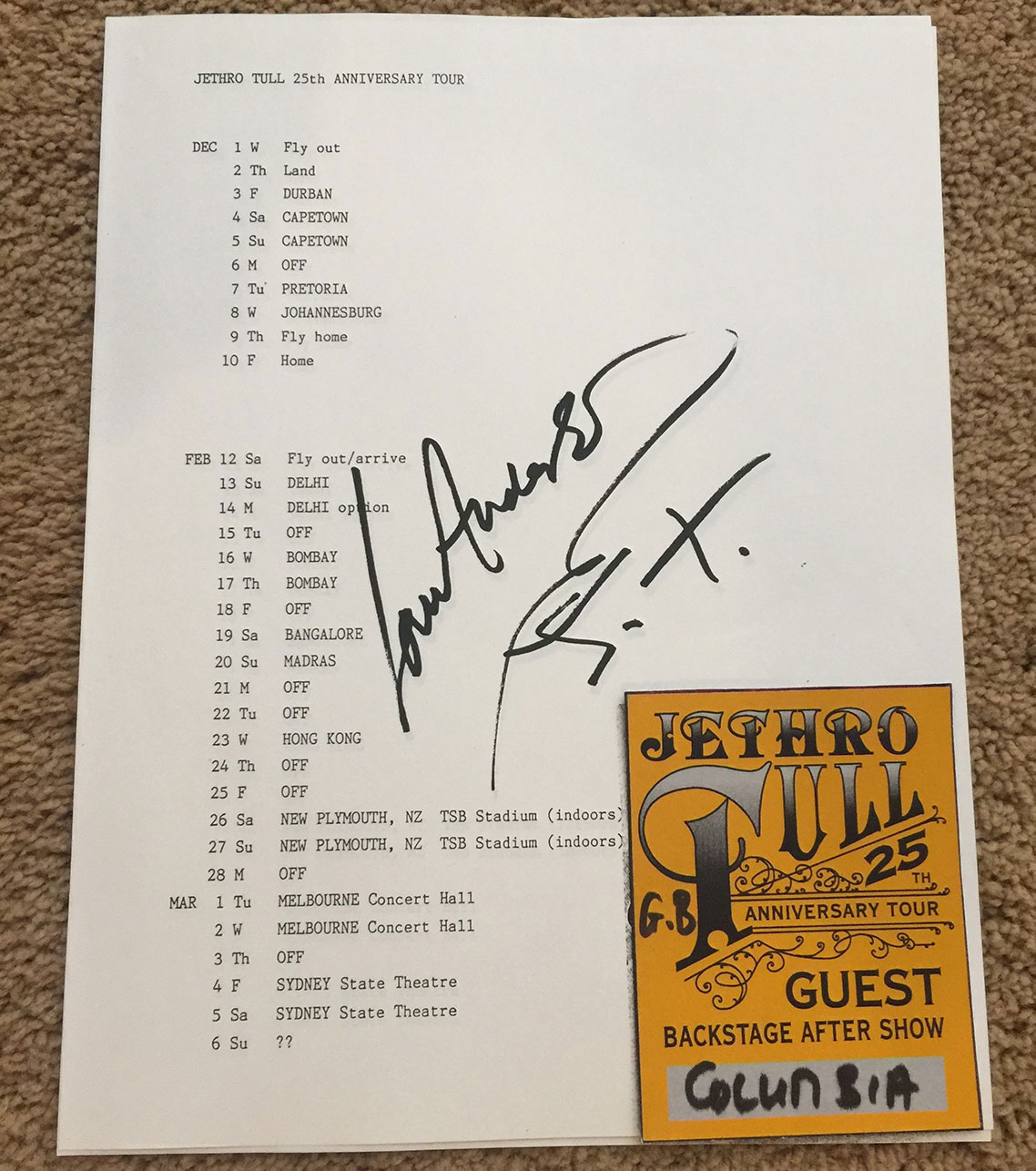 A five-decades-long Rock N’ Roll Fantasy journey with Jethro Tull and Ian Anderson begins in Bombay with The Combustibles and ends in Tel Aviv, with an intermediate stop in Columbia, MD. Is there more to come…?

50 Years: Jethro Tull and The Combustibles

October 26, 2018: Sheraton Tel Aviv – Ian Anderson is in Israel for the Jethro Tull 50th Anniversary Tour with his current band. Nissim is there on business and the chance encounter leads to an interesting discussion about The Combustibles and past meetings.

That is truly amazing Nissim. Meeting one of the legends of rock….out of this world. I saw them in Toronto some 15 yrs ago, 10 rows away from the stage…an evening to remember for sure, notwithstanding the plumes of smoke being exhaled quite openly.
Combustible fan forever!!!

Thanks for your own story about Jethro Tull – and great to continue friendships with all The Combustibles’ fans from Bombay. Truly hard to believe its really fifty years ago now! Hope you liked the other post about the Dishoom From Bombay With Love book and the band’s ongoing link with Dishoom in London and, of course, the photo in the book itself. Keep Rockin’ – Nissim

Hi Nissim, nice to know you guys ” Combustibles” are still combusting :). My memory of the band goes way back to Orlem – Malad where the band played in the mid 1960’s for a beat show as it was known in them days, along with a few other bands. The Combustibles ( great name for the band ) really rocked at the event, and left me a lasting impression, funny how some memories keep lingering on :), the bands performance was thrilling. Trust all you guys are well and still rocking.
Cheers, Lenny